Thursday April 6 – Severe weather was advertised all week as we tracked the southern storm heading our way. Despite the cooler air holding many in the 50s, the weather put on quite a show and possibly produced a tornado. The photos many shared with me ranged from cool clouds, storm damage, and even a spectacular rainbow. Here is a look at the storm scenes across our region:

Was there a tornado?

There was a tornado warning in northern Virginia, which could be associated with this. But it was not the only report of the potential. This photo is either an intense rain shaft or a rain wrapped funnel clouds. This was spotted by Allen Saucedo in Locust Grove, VA. He said there was lost of tree damage in this area after passing by. Melanie Copper reported rotation and debris in Abingdon, MD. I am looking to corroborate confirm this report

Shelf Cloud On The Chesapeake Bay

Thanks to Kirk Groves

I saw these long clouds stretched across the entire sky between heavy rain bands as the center of Low Pressure passed overhead mid afternoon. These pouches are from multiple downdrafts that are often a sign of a severe storm that is past its peak and weakening.  Maria captured these (and a rainbow) in Rockville, MD Dundalk- Tree down with wires by an Elementary School. Stephanie Malanowski- Martin‎ captured this…. 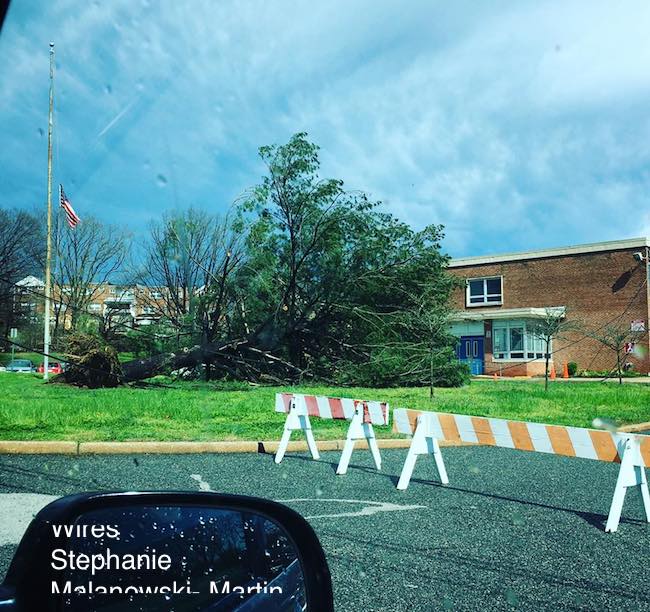 Mitchellville Maryland outside of Bowie? Two barns on family farm destroyed as reported by Justin Harvard

Washington DC- Severe Storm criteria has winds over 58 mph. It looks like that was easily achieved to push down these trees.

There is a truck under this tree… according to Christina Over 2 inches of rain along the Maryland and Pennsylvania border into York County. This is the Stewartstown Bridge from Scott Stevenson Calvert County after the first wave of storms Maria from Rockville captured this rainbow after seeing the mammals clouds shown above. Wind Damage Reports For Our Region