Tornado On Kent Island Likely Based On This Radar Loop

Tornado On Kent Island Likely Based On This Radar Loop After a very stormy weekend, the cell that developed after midnight was the peak performance. I often point out the heat of the day brings the most intense storms mid to late afternoon. But sometimes there are other factors that come in to play. This time it was around 1:30 AM. In fact The National Weather Service posted the Tornado Warning at 1:27 AM, only about 3 minutes before this apparently hit Bay City. See their warning below the radar loop video. Also see that this part of Maryland has a high frequency of funnel clouds.

So what could you do after a round of storms settled down and its the middle of the night? Imagine getting the alert while in a deep sleep and trying to process the information. Given the damage, it is amazing that this wasn’t worse. Here is the Velocity Scan at 1:30 AM. I’ve highlighted the wind direction (green towards the radar, red away). We can see a distinct contrast, just north of Rt. 50 and Stevensville. This is where Bay City took the direct hit. Compare this to the radar loop animation video below. 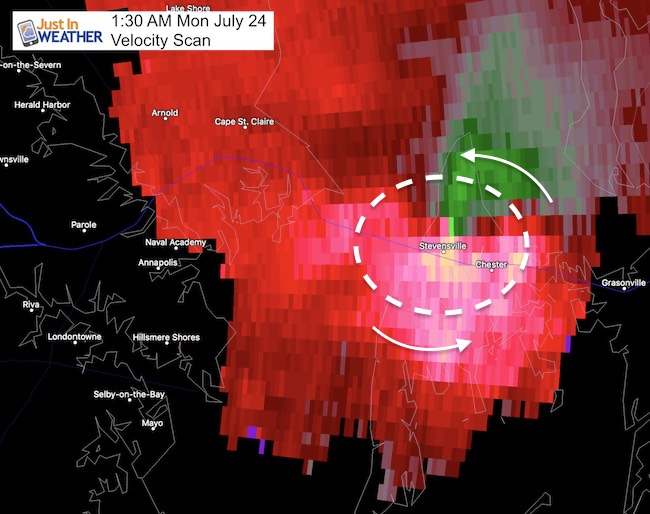 The radar will loop a few times, then switch to the velocity or mid scan. Watch and see how fast this develops. The bright pink patch of winds races in from Hillsmere Shores (south of Annapolis) and forces this storm to route in a hurry. Then the wind field spreads out. If the tornado is confirmed, it was only on the ground for a few minutes.

Is this area prone to twisters?

Waterspouts have been reported in this same area over the Chesapeake Bay. See these reports, including just last week.

Even if this was during the day, it might not have been easy to see. Here is security camera view looking west from Stevensville illuminated by lightning. It would be in the rain shaft on the left side of the screen. Thanks Mike Ranelli. 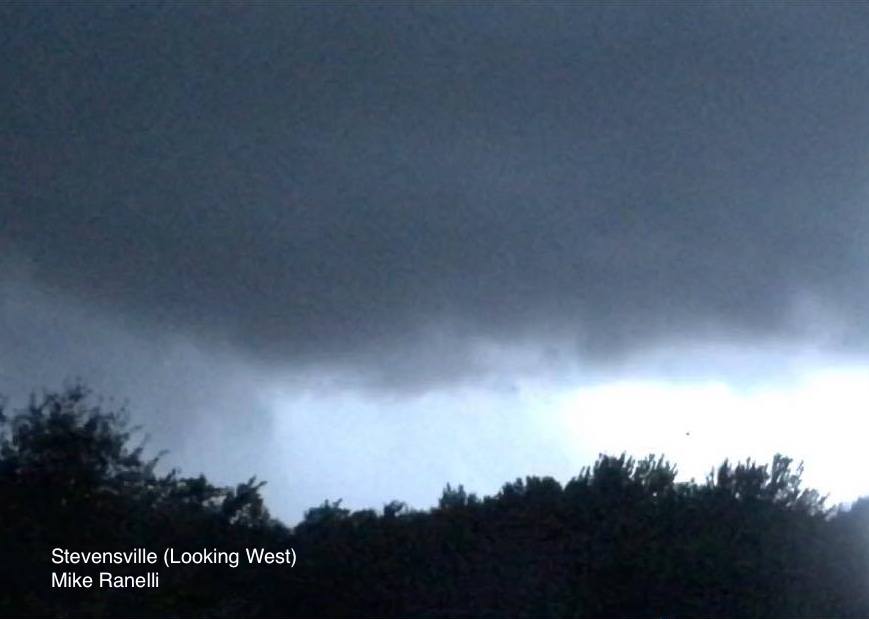 This was one of the first photos I received. This is from a friend of a friend who is out of town. I do not want to mention the name because of that, but they wanted to share this image a neighbor took in the Ellendale neighborhood.  Trees reported down on eastbound Rt 5o and all of Kent Island is without power. This is the exact report they issued at 1:27 AM. Queen Annes County is under the Mount Holly, NJ National Weather Service Office. This is on the western edge of their coverage area.

5,689 Affected Customers according to Delmarva Power